North Springfield Elementary School opened during the post-World War II period known as the baby boom. In September 1952, there were 20,200 students enrolled in Fairfax County Public Schools (FCPS) at 42 schools. By December 1959, that number would climb to 54,100 students at 84 schools. FCPS administrators had been projecting record enrollment growth for several years, but were unprepared when actual growth far exceeded their expectations. Rapid development of Springfield area neighborhoods in the 1950s led to severely overcrowded conditions at Garfield and Franconia elementary schools. FCPS administrators hastened to build Crestwood, Lynbrook, and North Springfield schools, but construction proceeded slowly because there was very limited funding for school construction. To combat bloated class sizes and the lack of available classroom space, FCPS administrators devised several unique solutions. In the case of North Springfield Elementary School, their solution involved several newly built homes on Axton and Kempsville Streets, approximately two blocks away from our school.

During the 1956-57 school year, FCPS rented five houses from developer Edward R. Carr for $75 a month for use as classrooms. Approximately 350 children attended school in these houses which were collectively referred to as North Springfield Elementary School. The Washington Post reported in November 1956, “The children are taught by 12 young teachers, six of them new to the teaching profession and 11 of them new to Fairfax County. They use a kitchen as a teachers’ lounge, and the children eat at their desks. Todd W. Shirley, principal of North Springfield, has his office in a bedroom. Many of the children study their lessons around a living room fireplace. Their desks are lined up before picture windows. Their writing paper, pencils, paste, and other supplies are stored in the linen closets of the five neat brick bungalows. The students park their bicycles on the lawns and, during recess, play in the traffic-closed streets. Half a dozen dogs come to school as faithfully as Mary’s little lamb and attempt to enter the recess games.”

North Springfield alumnus Michael Holmes was in first grade when classes were held on Axton Street. He recalled: “My class was held in the dining room, with the teacher's desk behind the free-standing fireplace, and the desks going through the dining room to the kitchen. There was also a classroom on the other side of the house with the bathroom in between.”

North Springfield’s enrollment climbed to 423 pupils in April 1957. The Springfield Independent reported on April 24: “Much progress has been made in the last two weeks on the permanent North Springfield Elementary School building. A roof has been placed over the single deck area and work has started on the interior walls and ceiling. The 22-classroom school will provide for 700 pupils and is scheduled for completion in time for the fall semester.” True to projection, North Springfield was completed on schedule and our building opened on the first day of school, September 3, 1957.

In July 1957, Principal Todd Shirley resigned, having taken a position with the Navy Department as the Superintendent of Schools for the Mariana Islands. He was succeeded by Boyd Winston Collins who served as principal from 1957 to 1969.

During Collins’ principalship several major changes happened in the public schools of Fairfax County. In 1960, FCPS opened its first intermediate schools. Prior to this time, elementary schools educated children in grades 1-7, and high school consisted of grades 8-12. Seventh graders from North Springfield were assigned to the newly built Poe Intermediate School.

When North Springfield opened, public schools in Virginia were segregated by race. In the early 1960s, FCPS began a slow process of desegregation, culminating at the end of the 1965-66 school year. School segregation and residential segregation were deeply intertwined in Virginia. Since at least the early 20th century, legal land documents for Springfield area properties had language in them which was designed to permanently restrict the sale of the land to Caucasians only. The restrictions “ran with the land,” meaning that no future owner of the property could undo this practice. These restrictions were already in place on much of the land when developers purchased it, so homes in nearly all of the newly developed neighborhoods were exclusively sold to white families.

In 1965, almost every former all-African-American FCPS elementary school ceased operation (one notable exception is Louise Archer Elementary School in Vienna). These schools were located in predominantly African-American enclaves, necessitating the busing of students out of these neighborhoods to formerly all-white schools. In 1968, the Fair Housing Law was passed, eliminating racial barriers to homeownership. North Springfield’s student body remained largely Caucasian until the 1970s, by which time the effects of the passage of the Fair Housing Law began to be evident in Fairfax County’s suburbs. 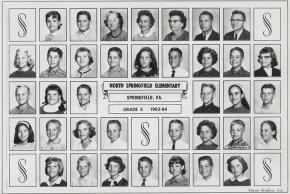 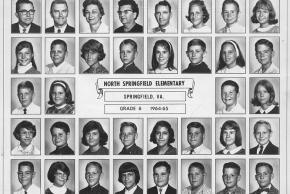 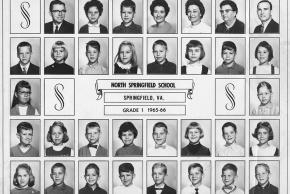 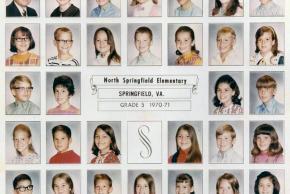 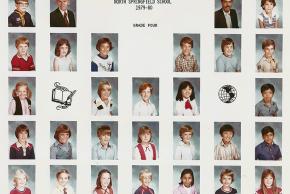 Did you know that when North Springfield Elementary opened there were no kindergarteners in our school? A kindergarten program was piloted in several schools in 1967 and proved so successful that one year later FCPS implemented kindergarten county-wide. FCPS enrolled approximately 8,000 children in kindergarten in September 1968. 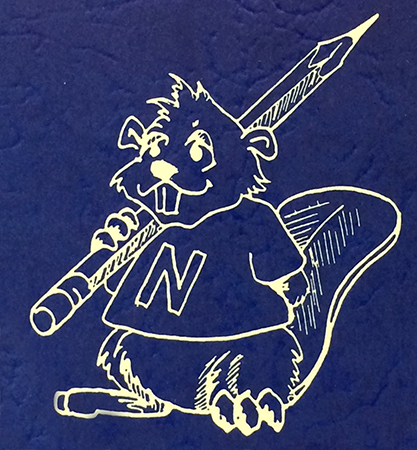 In the early 1970s our third principal, Ronald E. West, held a school-wide contest to create and name our mascot. Connie Craig Dupont, then a fifth grader, drew a picture of a beaver. “It was one of the few animals I knew how to draw at the time,” she recalls. “I was the one who won the contest. Mr. West, one of my most favorite principals of all time, gave me the award.”

In 1975, the Fairfax County School Board voted to open a center at North Springfield for students with special needs. The North Springfield Center was one of four such mental health centers in operation in FCPS at that time. Originally an “Operation Assistant” was in charge of the center, but later that title was changed to principal, and the principal of the center was a separate individual from the principal of the elementary school.

North Springfield Center had its own staff of teachers and operated out of a separate wing of our school. The first known principal of the center is Henry Irby, who led the facility during the 1976-77 school year. Susan J. Ezell led North Springfield Center in the early 1980s. James A. Sebben was the center principal from the late 1980s until the year 1999 when he was succeeded by Judith Owens. Owens remained principal until the center ceased operation as a separate institution in 2004.

North Springfield Elementary School was designed in 1955 by the architecture firm of Hayes, Seay, Mattern, and Mattern. Our school was originally designed with 14 classrooms, a library, an office suite, clinic, teachers’ room, cafeteria, and a kitchen. However, while construction of our school was still in progress, additional construction funding became available and eight more classrooms were added to the building. North Springfield was built by the Whitener & Skillman Construction Company for approximately $480,000.

During the baby boom, the United States Congress appropriated financial aid to school districts impacted by the growth of the federal government workforce. The majority of the construction funding for North Springfield came from federal grants because 85 percent of our student body in the 1950s came from families who worked for the federal government. In 1963, construction began on a second addition to our school. Built by the Whyte Construction Company at a cost of $170,490, the addition consisted of eight classrooms, an enlarged library, and increased cafeteria capacity. This addition brought the total number of classrooms to 30, making North Springfield the largest elementary school in the county at that time.

A third addition to North Springfield was constructed in 1968. Five classrooms, a gymnasium, a music room, and a science room were added, bringing the total capacity of the building to 1,050 students. Our school has been renovated twice since 1968, first in 1990 and again in 2015. Both of these renovations were building-wide renewals, modernizing the physical plant. The 1990 renewal was contracted to Merando, Inc. for $3,394,000, and the 2015 renewal was contracted to R.J. Crowley, Inc. for $15,100,000. Both renewals were funded by the sale of voter-approved bonds and we are deeply appreciative for the support of Fairfax County voters for our public schools.

What's in a Name?

Learn about the origin of our school's name in this video produced for Fairfax County Public Schools’ cable television channel Red Apple 21.